A STATUE TO JEAN ARMOUR IN DUMFRIES

For many years, Dumfries Ladies Burns Club No. 1 had the ambition to erect a statue in Dumfries in memory of “Bonnie Jean”, the love and wife of Robert Burns. Sadly the plan never materialised but in 2002, following the unveiling of the superb Jean Armour statue in Mauchline, Dumfries Burns Howff Club decided to adopt the scheme as a project for Dumfries.

A sub committee under the convenorship of past president Ian Whitehead was formed to investigate the feasibility of commissioning an appropriate memorial to Jean and a contribution to public art in the town, complementing other local memorials to Burns and benefiting Dumfriesians and visitors alike. Initial enquiries revealed that a life size bronze statue would cost in the region of £25,000 and it was decided to launch a public appeal for funds. A prospectus was issued to local business, Burns Howff Club honorary members and clubs and societies affiliated to the Robert Burns World Federation.

The Dumfries & Galloway Standard took up the scheme with enthusiasm and committee members soon found themselves discussing the statue on Border TV. The initial result was astonishing. Maureen McKerrow of the Globe Inn pledged £2000 and donations came in from members of the public, local firms and organisations. Ian’s employers, EME Furniture of Sanquhar also pledged £2000. An early boost was a magnificent donation of £5000 from Tom Sutherland of Colorado, USA, the former Beirut hostage and an honorary member of the club, having proposed the “Immortal Memory” at the club’s Anniversary Dinner in 2000.

Thomas Tunnock, the biscuit manufacturer of Uddingston, donated £1000. Meanwhile, club members were engaged in a wide range of fund raising activities. The then president Gordon Johnston, himself an international competitive cyclist, undertook a sponsored cycle run from Alloway to Burns House, Dumfries, a distance of 70 miles. A party of golfers from Bolton visiting Dumfries donated £200. The project had captured the public imagination and donations kept rolling in. Dr. Jim Connor from Canada sent a cheque for £50.00. 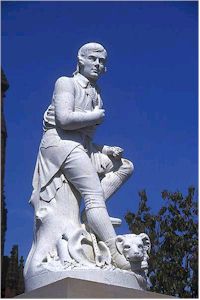 As the centrepiece of the fund raising campaign, the club decided to organise a Scottish Cultural Evening in the Easterbrook Hall, Dumfries in March 2003. Honorary member Joe Campbell agreed to chair the event and another honorary member, David Shankland OBE would deliver a tribute to Jean Armour. An impressive entertainment programme was arranged featuring local artists and members of the Junior Burns Club. The evening was well supported and a great success with the fund swelling by £2500. Howff Club treasurer David Baird obtained two football strips, one each from Rangers and Celtic, both signed by the first team players. Those were raffled bringing in £1000.

Hawick Burns Club responded with enthusiasm. They formed their own fundraising committee and presented a cheque for £2500 at a social evening in Hawick in April 2003. Generous donations were received from individuals and Burns Clubs and Caledonian Societies worldwide. Through the good offices of George Anderson, Glasgow Masonic Burns Club donated £2000. Pubs in Dumfries were supportive and handsome donations were forthcoming from their Burns Suppers and other social events. In August 2003, with the fund standing at £27,500 and the target exceeded, it was decided to commission design work from a shortlist of five artists supplied by the Scottish Arts Council.

The design specification would feature Jean Armour as she would have appeared during the lifetime of Robert Burns with a Bible in hand and the figure of a five year old child. Shambellie Museum of Costume was consulted for guidance on appropriate dress. With the fund reaching £30,000, it was decided that a one and a half times life size statue could be afforded. A design submitted by Nautilus Burleighfield, of Essex, who would also cast the statue was accepted and an order placed. The firm produced a maquette for the Howff Club’s AGM in April, 2004 which was universally praised but resulted in some minor design changes. Delivery and installation was promised for August 2004. Dumfries & Galloway Council was supportive. As well as a handsome donation to the Fund, they provided a site in Brooms Road, opposite the gates of St. Michael’s Church and a short distance from both Burns Mausoleum and Burns House. The Burns Festival Trust kindly financed the provision of lighting at the base of the statue.

Following consultation with the Council, it was decided to mount the statue on a concrete base, clad in granite and featuring a commemorative plaque. By this time, past president Chris Lyon had succeeded Ian Whitehead as convenor and plans for the unveiling were put in hand. The club’s honorary president, the venerable Hugh Sloan was invited to perform the unveiling ceremony and Provost Ken Cameron, OBE and Council Convenor Andrew Campbell agreed to attend. Dumfries & Galloway Council agreed to provide a Civic Reception to follow the unveiling and the award winning Dumfries & Galloway Constabulary Pipe Band were engaged together with other local artists.

Saturday 4th September was chosen as the date for the unveiling ceremony and after installation, the statue would be kept under wraps until then. Delegates to the annual conference of the Robert Burns World Federation to be held in Dumfries on the following weekend would be afforded an opportunity to view the statue during the conference. At the time of writing, July 2004, plans are well advanced for the unveiling on 4th September and a great day for Dumfries and the Burns world is in prospect.

Hopefully the Burns Howff Club will have done Jean Armour proud and have created a memorial of national and international importance. The club would like to take this opportunity to thank sincerely the people of Dumfries for their support and to the many Burns Clubs and Caledonian Societies, to numerous to mention and other organisations, far and wide, for responding so magnificently to the appeal.