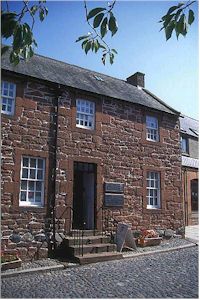 In May 1793 the family moved to a better quality house in Mill Street (now Burns Street). Their standard of living was good and they employed a maid servant. The house had two bedrooms, a parlour, a kitchen and even a small study. It was well furnished and carpeted. Well wishers would often send Burns game or country produce and occasionally, barrels of oysters. He was always anxious that Mrs Burns should be well dressed. She was one of the first women in Dumfries to have a dress of gingham, at that time an expensive material