Whilst, for a variety of reasons, the numbers present were less than usual, I certainly felt it was nonetheless an absolutely excellent night. Professor Purdie was as entertaining as ever and, if anything, I could have happily listened to him for longer. Past presidents John Caskie, Les Byers and Jim McCambley were on top form and provided truly outstanding entertainment for the evening. It was also a real delight to have had the opportunity once again to listen to the brilliant musicianship of Andy Kain and Leonard Brown.

Posted in Uncategorized | Comments Off on Halloween Supper

The statue erected to Robert Burns by Portpatrick Burns Club in 1923 was badly damaged in a major storm in the 1980’s which brought down the hill side overlooking the site at the bowling club. The Burns Howff Club had previously been involved in the refurbishment of the statue. In the intervening years, the statue deteriorated but as Portpatrick Burns Club became defunct, Stranraer Burns Club arranged to refurbish and repaint the statue with the cooperation of Portpatrick Bowling Club. A ceremony to mark the event was held on 25th September when myself and 6 members, including Past Presidents Jack and Tom Johnston who were instrumental in the 1980′s repairs, made the journey to be present at the unveiling of the beautifully restored statue before the company retired to the Waterfront Hotel for a meal.

Posted in Uncategorized | Comments Off on Refurbishment of the Burns statue at Portpatrick. 25.09.16

On Sunday 2nd August 2015, 20 of us travelled to Irvine to visit their Burns club. We were greeted by members of the Irvine Burns Club who gave us an extremely warm welcome. After being shown a mural that explains about Burns’ time in the town we had a look around the museum upstairs and were shown some of the many treasures that Irvine Burns club possess. I have to admit, handling their copy of the Kilmarnock Edition was a highlight of the trip. After a light lunch, again kindly supplied by the members of Irvine Burns Club, we visited The Mother Lodge, Killlwinning 0. We were given a very interesting history of the lodge by the RWM and then after viewing their Masonic museum we visited the Killwinning Heritage centre. We were also given a tour of Irvine Harbour project that is nearly complete now before retiring to The Ship Inn where we enjoyed a cracking meal and were joined by Bill Nolan who’s knowledge of Burns and the history of both the town of Irvine and its Burns club is impressive. Home for 9.15pm after what was a very memorable trip. Well done to Hon Sec D Smith BEM for his organisation of the trip which was up to his usual high standard.

Posted in Uncategorized | Comments Off on Annual Outing

Accomanied by JVP Colin Gibson we attended the annual Guid Nychburris celebrations as guests of The Dumfries Cornets Club. Having processed to the Mid Steeple we enjoyed the reading of the charter and crowning ceremony before making our way back to The Municipal Chambers for a reception. Thanks to club members Bob Kennedy for the invite and past president John Caskie who was resplendent in his Baillie’s robes for his direction. Thanks also to Provost Ted Murray for his kind hospitality.

Posted in Uncategorized | Comments Off on Guid Nychburris Celebrations

Can I take this opportunity to thank all those who attended and contributed to last nights soirée. It was a great night with loads of laughs. For some reason I have a sore head this morning, I think it must’ve been the Chateau de Chasselas Obadiah. I hope the Python’s will forgive our Scottish/Yorkshire/Lancashire accent! To all those competing for the dreaded Draffan Cup tonight I wish you good luck and hope the weather stays fair.

I was in Portpatrick with Lisa and whilst there was tasked by Hon Sec D Smith BEM of obtaining a photograph of the statue of Burns situated in the grounds of the bowling green. It was erected on 1st May 1929 by Portpatrick and District Burns Club and I’m told that Burns Howff Club members helped to repair it when it was damaged in the 1980’s during past president Donald Urqhart’s year in office.

It may be that some of our more senior members remember this and can enlighten us further. I will attempt to publish an up to date photograph on the blog.

On Sunday 10th May 2015, I attended at Coldstream to lay a wreath on behalf of the club at the annual Coldstream bridge ceremony. Accompanied by Hon Sec past president D Smith, past president Ian McIntyre and SVP William Johnstone we arrived in good time for bacon rolls at The Besom public house along with Bobby Kane JVP of the RBWF and John Campbell, president of the Fauldhouse and Crofthead BC. We thereafter spent a great afternoon in the company of the members of Coldstream and other Borders Burns clubs after a lovely service at the bridge.

Thanks to Chairman David Douglas of the Coldstream BC and Secretary John Elliott for their warm welcome.

I’m pleased to report all Howff club members were well behaved however parachute rolls are becoming a common occurrence for some!

Posted in Uncategorized | Comments Off on COLDSTREAM BRIDGE CEREMONY

It won’t be long now

Well only a couple of hours to go until our AGM. I must admit it is quite a daunting prospect when thinking about becoming president of one of the worlds most famous Burns clubs however I am looking forward to the experience. Can I take this early opportunity to congratulate President John Clark on a marvellous year in office.

President’s notes on the Trip to the ‘Devil’s Porridge’ April 2015. Final Blog
The last outing by the Burns’ Howff Club in my term of office was to the Devil’s Porridge at Eastriggs on 30th April 2015 An almost full bus headed off from Brooms Road Car Park to the re-located and recently built premises. With a good tail wind we made excellent time, arriving so early the premises were closed and suspicions were aroused that we may have embarked on a fools errand!

Patience however was rewarded when the guide appeared and duly shepherded us into the building. Richard, the guide, was most knowledgeable and gave us a briefing on the huge munitions factory complex whose breadth covered aprox 12 miles, employing an astonishing 30,000 people. Built originally to supply gun cotton at the start of World War 1, it expanded to cater to the demand for munitions during World War 2. The museum is now state of the art in respect of presentation, with numerous exhibits supported by visual and audio displays. 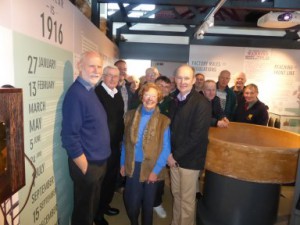 There is a fascinating corner covering the terrible rail disaster that happened during world war 1, near Gretna , which claimed in excess of 200 lives. The new museum is very much worth a visit, even if you have visited the old one and are acquainted with items on show. Within the brand new building, the presentation is much clearer and less cluttered than the old premises. Outside a large compressed air driven locomotive is proudly on display complete with a rather striking livery of camouflage green. Cutting edge engineering in its time!

After some liquid refreshment at the Blue Bell, the evening concluded with tasty fish suppers and rather grand looking Steak Pies, consumed in the famous Cafe Royal in Annan. I’m pleased to report all plates were cleared and paid for without incident (we’ll not mention the Italian Job at Moffat). I close my final blog as president with many happy memories. A special mention must go to David Smith (and others in the senior executive) who organise away trips, lectures and other events with such military precision. I look forward to the next twelve months in a more pastoral role and wish our new President all the best in the coming months.

On Wed 22nd April 2015, David Smith and I were delighted to attend the last social of the Dumfries Ladies Burns Club for the 2014/15 programme, held in the recently refurbished lounge of the ‘Hole In the Wa’ , ably hosted by President Jean McMillan Foster. From memory, numbers were down on last year but this did not dampen the enthusiasm of the hosts who provided excellent hospitality. A tasty supper ensued, followed by greetings from kindred clubs. Maestro accordionist Max Houliston, with guest singers provided the core of musical merriment and a raffle raised a tidy sum. Anxious to have ‘earned my crust’ I was about to read a humorous poem about memory loss when a ripple of laughter followed the disclosure, I had won a memory pad in the raffle!

The evening was varied as it was entertaining, with readings, poems, singing, flute playing and a large dash of operatic singing. There was also a rousing and animated version of. ‘Sam the skull’ sang with gusto by Kate Kaye (from Dalbeattie) which had the company in stitches!

The top table was well represented by senior members of kindred clubs. With so many chains of office on show, this gave our Hon Sec an opportunity to proudly show off his newly acquired and much deserved B.E.M. to much applause from a throng of admirers. When asked to say a few words, David modestly remarked, the award was long overdue and to the delight of most ladies present, offered anyone who wished, an opportunity to kiss his ring! All in all a most entertaining night in good company and very convivial surroundings.