A full house crowded into the Globe Inn on Monday 26th January 2015 to enjoy the club’s 126th Anniversary Supper. When introducing the top table and guests it was my great pleasure to ask the members to be upstanding to applaud the Hon Sec David Smith on being awarded the BEM in the New Years Hons List. To a man all stood and congratulated the Hon Sec on his award. Modestly David accepted the applause and gave a brief response on this unexpected but fully deserved honour.

It was great to see John Caskie back in the fold in great form and sporting a new hairstyle. He did not disappoint with the opening song ‘There was a lad….! Grace before dinner was rendered by Dan Cook and after a fine bowl of broth, the haggis was piped in style by our club piper Calum Watson and addressed by myself. Apologies for the little senior moment during the address but I managed to recover sufficiently to allow proceedings to continue. A fine meal was served by the Globe. After the loyal toast and a beautiful rendering of ‘Aye Waukin Oh‘ by John Caskie the evening progressed with a selection of Scottish favourites by James Coutts and Ian Kirkpatrick.

It was recorded that a very generous £135 was collected for the Globe Staff in thanking them for the speedy and excellent service. After greetings were read by the Hon Sec the much anticipated Immortal Memory was given by Fraser Sanderson. With no notes Fraser gave an outstanding immortal memory that was entertaining, well researched and expertly delivered. After a lament on the pipes by Calum Watson, John Caskie had the whole company singing with a rousing version of A Man’s a Man! Fraser was presented with a certificate conferring honorary membership in thanking him for a most excellent immortal memory. 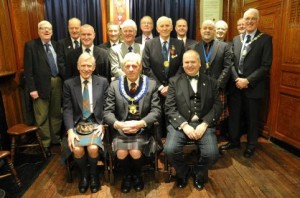 The incorrigible Bobby Jess then gave an expertly delivered and faultless Tam O Shanter to a most enthusiastic crowd. After some more Scottish airts on fiddle and accordion by the brilliant duo Coutts and Kirkpatrick the second principal speaker Niven Rennie toasted ‘the lassies Oh’ and had us rolling in the isles with a selection of bawdy jokes and repartee. An inscribed tankard was presented to Niven as a memento of the evening.

It was nice to see our friends, President George Dunwoody and past President Joe Platt down from Dumbarton Burns Club and they were given a warm reception by the members. Calum Watson showed his prowess on the pipes with an impromptu performance and a surprise recitation from the mystery entertainer Jim Mc Cambley had us all in stitches with a hilarious ‘Drunk Man’s Address tae the Haggis’ Further rousing songs from John Caskie and Bill Welsh led the evening to a close with some community singing. JVP William Johnston gave a comprehensive vote of thanks and the evening concluded with a rousing version of Auld Lang Syne. A most enjoyable evening which concluded a little earlier than anticipated which allowed a little more time at the bar for those who stayed on for a wee dram. A grand night of mirth and merriment!